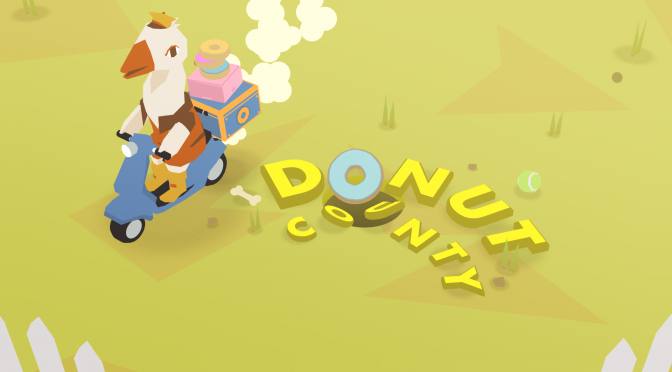 In Donut County, you make holes. And then you move the hole around to collect things. The more things that fall into your hole, the larger your hole gets. The goal of each level is to put everything into your hole. Also, you play as a raccoon (named BK) and you’re putting all these things into holes because you think they’re trash and you love trash.

While the gameplay is rather simple, the writing is rather good. It’s one of those stories that starts near the end as all of your neighbors and friends are mad at you for dropping all of their stuff into your hole. They’re mad but really kind of chill about it, and BK is kind of a dick about it but not really. He really wants a quadcopter and he has to drop all this stuff down the hole to get it, even if it means wrecking things. By the end, there is character growth.

It is a short game, but I would say that’s not a bad thing. Like many other shorter, more readily accessible games, it’s less of being too short and more of not overstaying its welcome. It’s over before the cuteness of it becomes annoying. Donut County is one of those games you can give to just about anyone and they will have a good time. It’s not a huge mind-blowing experience, but it’s fun and has a point.