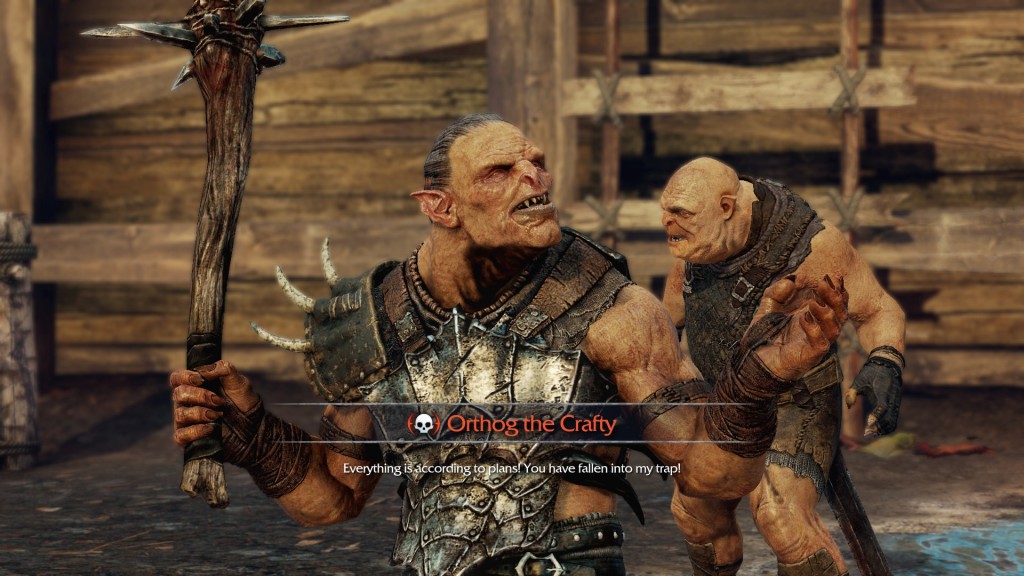 Orthog the Crafty was a bodyguard of Pash King-Slayer, one of Sauron’s warchiefs. It’s a good idea to eliminate bodyguards before going after warchiefs, so I targeted Orthog. After gaining some intel on him, I learned his strengths and weaknesses. Vulnerable to combat finishers, meaning I can kill him fairly quick but I have to wear him down a bit first. Strong against monsters. Invulnerable to ranged and stealth. Note the name: Orthog the Crafty.

The mission to confront Orthog came as a Trial of Ordeals. Uruk fight other monsters in order to demonstrate their strength. The mission was to interrupt or exploit the trial to get to Orthog. In most cases, the monster gets a few shots in, but it’s not likely to survive. My vantage point had plenty of arrows, but I knew those were useless against Orthog. Knowing he was strong against monsters, I made the choice to move to attack almost as soon as the caragoar got out of the cage. At worst, I’d have to deal with the caragoar after I beat Orthog, right?

Wrong. Orthog the Crafty. As soon as I dropped into that arena, Orthog was ready for me. The caragoar was never going to scratch Orthog. It was already dead. The Trial was to lure me in and I walked right into it. Knowing this could be a 1 vs 50 battle, I moved quickly to get some shots in on Orthog. That’s when Krakhorn Broken-Shield stepped in. 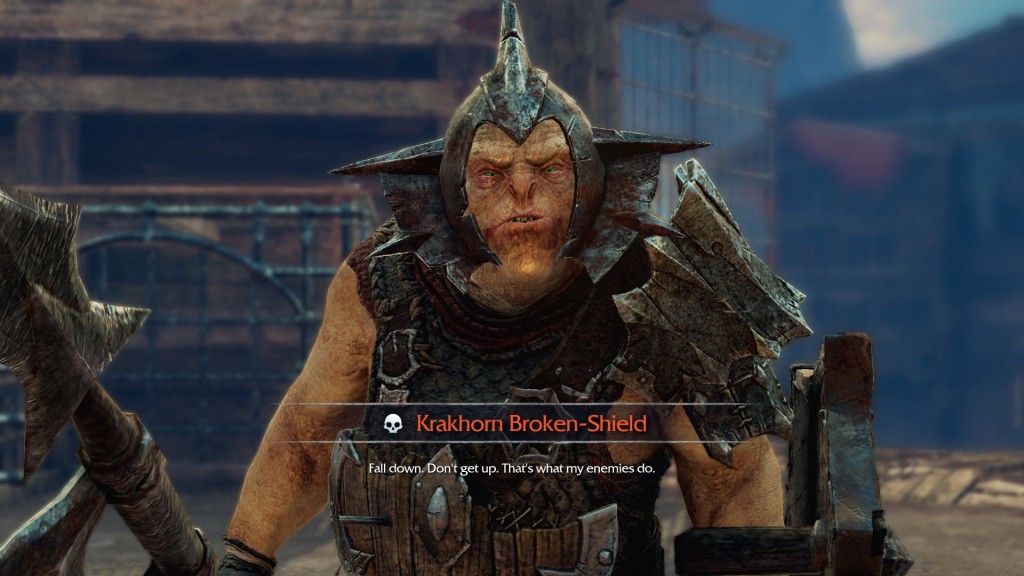 Krakhorn is subordinate to Orthog. He’s big, he’s got a shield, and he’s vulnerable to stealth attacks. There’s not a lot of stealth to be found when you’re surround by Uruk, so he wandered into pretty much perfect conditions. However, Orthog was my target so I kept focusing on him. And once again, I’m surprised when another Uruk captain joins the fray. 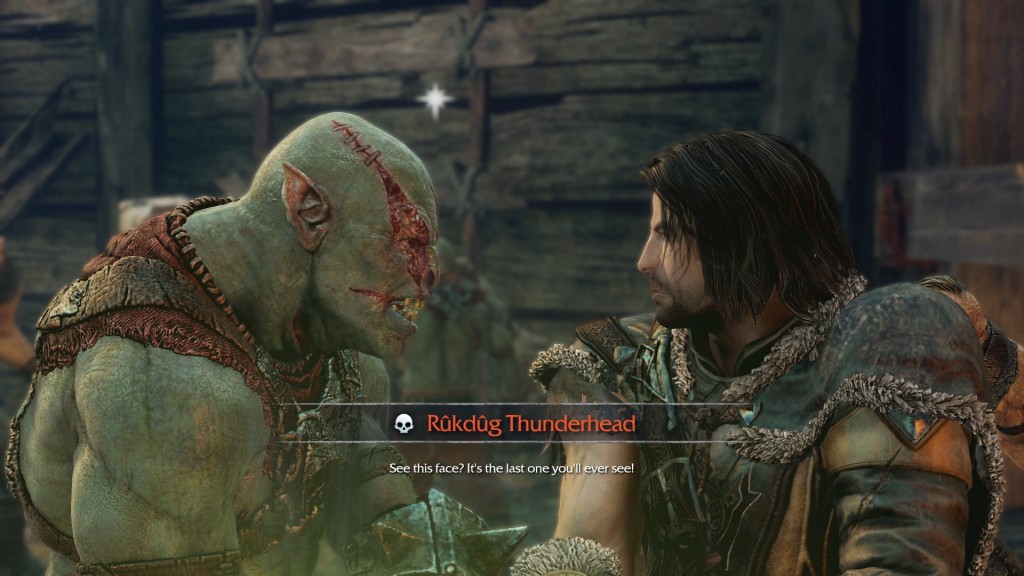 Rukdug is also subordinate to Orthog. Orthog the Crafty. This was all a giant trap. Orthog can’t beat me, so he’s got two friends waiting for me to engage him. I walked right into it. Crafty. It’s in his name! I knew he was a monster killer, and I still decided to engage him in a Trial. I underestimated this Uruk captain.

Despite the odds, I kill Orthog. That was a foregone conclusion by the time Rukdug shows up. When I do, the other two captains try to escape. Rukdug doesn’t get away. I didn’t have any intel on him, but I learn quickly that he’s not invulnerable to steel. After dropping Rukdug, I start thinking about making my escape.

As I’m running over the roofs of building in the Uruk stronghold, I spot Krakhorn. He’s not very fast. I’m much sneakier now. I get ahead of him a bit and lure him to a ledge. Krakhorn is vulnerable to stealth attacks. 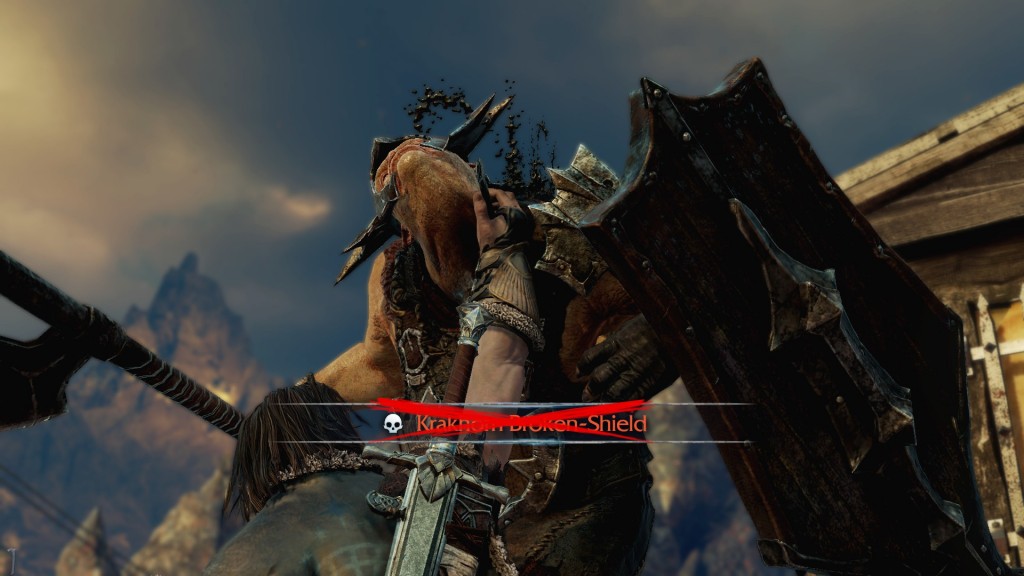