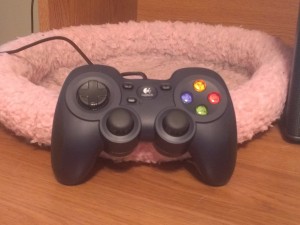 I bought two Logitech F310 controllers a couple years ago: one for me, one for Katie. They’re made for PCs, and they’re compatible with Xbox 360 controllers. They work perfectly for PC gaming when an Xbox 360 controller is supported. It’s got a great feel and it’s pretty sturdy.

But my left trigger started sticking sporadically. Impossible for me to replicate, but it was often enough that it made playing games frustrating. So, hoping for the best, I contacted Logitech support. From my description, they determined that the controller was faulty, and they’d send me another one. Less than a week later, there it is. No credit card hold, no sending back the broken one, and I didn’t have to answer one million questions or jump through half a dozen support techs.

This controller has a three year warranty, standard. A lot can happen in three years and I’m certain that if something goes wrong with this one, Logitech will treat it the same way they did last time.  That’s great service, and that’s why I buy Logitech.

Well. That was a video game.

I love Dead Space and Dead Space 2. I’ve read plenty of less than stellar reviews of Dead Space 3. Those reviews were not exaggerating. With the exception of the introduction, which is more or less still tutorial territory, the first third of the game is mostly the Dead Space I enjoy. You’re in space, there’s monsters, and a lot of cramped corridors. Then you land on the planet, and there’s no space, and still tons of the same monsters, and human enemies are shooting at you, and it gets real repetitive.

The Dead Space series really transitioned from survival horror to straight action game. I noticed from the start that I was picking up health packs and ammo like this was Doom. Although I enjoy a good action game, I preferred the survival horror aspects of the first two games more than their action. I mean, Dead Space already has good action! I didn’t really need more focus on it.

The weapon crafting system is neat, until you min-max it to the point where you carry and use only one gun. Universal ammo is almost always frowned upon, and it still applies here. Why use any other gun when I’ve built the one that does the most damage halfway through the game? You can only carry two, and each gun can have two functions, so one gun was my close-range gun, and one gun was the long distance gun. The use of the same two guns for huge portions of the game really contributed to the repetitiveness.

Speaking of repetitive, I skipped the last two or three optional missions. I couldn’t bring myself to slog through more of the same enemies any longer than I had to at that point, which was about 3/4th through the game.

And the ending. The ending actually made me like the entire product less. The ending is stupid. Not good, not what the fuck, just stupid. And then credits roll over some real generic nu-metal. Remember the end of Dead Space 2? I do. It’s memorable. And when credits rolled, it was over a track called “Lacrimosa” which was so perfect, so fitting, that I immediately looked up the Dead Spce 2 soundtrack so I could hear it again. The credits music in Dead Space 3 is awful. And then there’s a tidbit at the end which further emphasizes that the ending I just watched was stupid.

I don’t know, man. Definitely play Dead Space and Dead Space 2. But maybe, you should skip Dead Space 3. It’s easily the weakest of the three and maybe not even necessary.

After wandering the wasteland and exploring countless buildings and locations, I stumbled across a clean toilet. Every other toilet was post-apocalyptic: broken, dusty, dry. This one was a normal toilet, full of water.

Curiously, you could “use” this toilet. Surprising because you can’t use the broken toilets, but there’s plenty of precedent for usable toilets in video games. So I press the use key and expect a stream of video game urine, or at least the sound of peeing.

Nope. Just a slurp. As if I had found any other water source. Because if I had been wandering the wastelands and drinking dirty, irradiated water from puddles, and fighting mutants, and struggling through a world where clean water is a commodity, I’d probably drink clean toilet water too.

I don’t think I’ve ever laughed so hard at something in a video game in my life.

Here’s the long and the short of Gone Home: you explore a house and learn about yourself (as a character) and your family. That’s it. There’s no guns, and no monsters, but there might be a ghost. You spend a lot of time rooting through other peoples’ belongings, picking through the scraps of their lives. And it’s fantastic. There are times when the house feels comforting and familiar, and times when it’s a creepy old house that may be haunted. But it never feels fake. There’s no other game like Gone Home. It’s not going to click with everyone, and it doesn’t have to.

I’m playing Shadow Warrior, and it has reminded me that BUILD engine games always start with the best lines. Not that these are the best lines in their respective games, but the first spoken line really sets the tone for these particular games.

Regardless, it’s pretty fun, and it looks amazing.